October means only one thing, the annual k9-Club Halloween party! On the 26th October from 10am to 4pm K-9 Club opened its doors for its clubbers to have a spooktacular party.

Everyone arrived dressed in their fabulous costumes ready for a day of fun and games. All the dogs seemed extra giddy, it was almost like they knew how much fun they all were about to have. Some of the owners stuck around to weigh up the competition. Once all the dogs had arrived it was time for the photoshoot of them all dressed up. This was easier said than done!

After the photoshoot we then moved on to the games. The first game the dogs played was grave digging, we placed lots of smelly treats in a big plastic pool filled with straw. The dogs had to sniff and dig through all the straw to find the treats. Boo and Poppy were extremely good at finding them, but Jack on the other hand preferred to make himself comfy in the straw and wait for treats to be handed to him. The next game that we played was tomb raiders, this game was quite similar to grave digging but a little more challenging as the treats and straw was placed into decorated tombstone boxes. Nelly and Marley quickly figured out how to get into the boxes and It wasn’t long before they had torn open the boxes and were demolishing all the goodies inside. Then we played Orb chasing, or in other words chasing bubbles. Not everyone was quite as interested in this one, but one dog in particular, Pippy loved jumping up and catching them. After this we played apple bobbing and pass the pumpkin with a treat filled orange parcel.

With the games finished, all the dogs were ready for a toilet break and they were taken to the garden. Once back inside, the fun continued with a spooky doggy disco. They all strutted their stuff on the dance floor in their costumes to the Halloween beat. All this playing and dancing worked up an appetite and each dog tucked into a homemade pupcake! Yummy! They went down a treat and the dogs soon began to nod off one by one for a quick power nap. 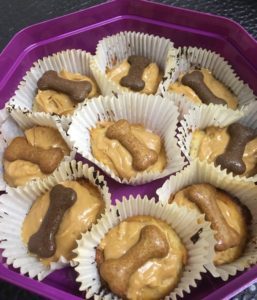 The day was drawing close to an end and owners started arriving to pick up there very tired pooches. Everyone left with a treat cone that included yummy treats and a toy. The fancy dress winners were all awarded a Pets At Home gift voucher to be spend on their pooches. They were a great bunch of dogs and the day was a great success and lots of fun.

We would like to thank all of our owners for making such a great effort with all their costumes and we look forward to hopefully seeing you all for the K9 Club Christmas party on the 21st December.